Note, that this page is under construction. It probably needs grammar support too. It was created by @docRoboRobert and he's working on it, so more content will be added. You rather shouldn't add new content unless it's grammar correction.

You can help @docRoboRobert by doing research yourself or sending him useful messages.

Have you ever wondered which element is the best fuel? Which element is ideal for your engine or rocket? Have you ever wanted to know which element is more efficient: NITR or GUN? This article will present different fuels and their statistics. This page also includes combinations of elements. There are the most obvious and most popular types of materials that can power generators or can be used in models of rockets. This comparison shows different possibilities of fuel, their advantages and disadvantages, and also few numbers that describe its power. Everything is shown in the table below.

A fuel is any material that can be made to react with other substances so that it releases chemical or nuclear energy as heat or to be used for work. In TPT, a fuel is any element that can generate energy (mostly heat), which can be used to power different machines and simulations. Fuel changes its state due to chemical or nuclear reactions and releases portions of energy at the expense of losing its internal power.

We can distinguish the following types of fuel:

How to examine and describe fuel

There will be information on how @docRoboRobert measured different types of fuel. Actually, this part is under construction. 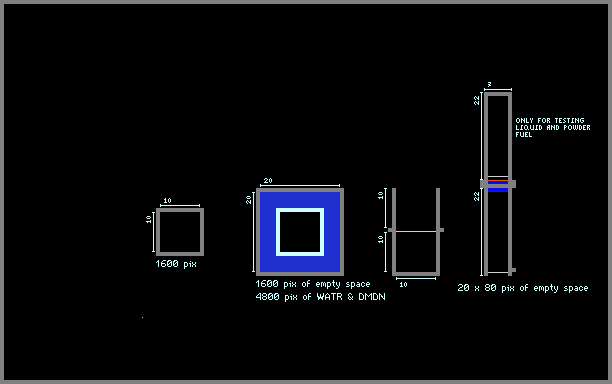 This is an apparatus which allows to measure properties of different fuel types. The first box should be filled with testing material and ignited. This box can be used to log temperature data and measure pressure. The second box is used to measure how much energy (heat) is transferred to other materials and how effectively it can conduct heat. 3rd container is used to measure the burning time and measure temperature for elements, which can't be properly ignited in 1st box (like OIL). The last machine is rocket engine test. This can be used to measure how effective the element is as rocket fuel and how much thrust it can generate.

Here are some formulas that can be used to measure effectiveness and power of different fuel types.

Burning time It's how long (in frames) you need to wait until all fuel is burned out. Note that in some fuel types, burning time depends on where the fuel was ignited from. For example: GUN burns instantly if it's ignited from the bottom.

Fuel effectiveness Can be measured using this formula:

Δ water temp. is the difference between temperature of water after burning time and temp. before ignition and divided by 3 due to there's three times more water than fuel in testing chamber.

After that, the number have to be divided by 100 to get smaller number. (eU is energy unit)

Released energy can be measured using this formula:

Amount of additional particles is a number of extra particles released during burning (total released particles - number particles of fuel before ignition).

After that, the number have to be divided by 100 to get smaller number. (PEU is Powder Energy Unit)

Efficiency have to be measured when released particles (mostly fire) are half-way out from testing tube (last testing chamber).

Gas, solid, and other fuels that can't flow should be tested in bottom tube.

Advantages & disadvantages are described from observations and analizing different saves. They're the most common thoughts of others users.

Notes are the special/additional informations about fuel that might be helpfull.

There will be the table with different fuel types, their statistics, advantages and disadvantages. Actually, this part is under construction.

Making your own mixed fuel

There will be information about mixing elements to get your own fuel. Actually, this part is under construction.