From The Powder Toy
(Redirected from Hidden manual for photons)
Jump to: navigation, search

Travels in straight lines, refracts through glass, scattered by quartz. Ignites flammable substances such as wood and explosives. Usually used as a medium to transfer heat.

The colors of PHOT can be changed when passing through FILT. PHOT wavelengths can be split with a prism of glass.

When traveling through non-pressurized INVS, PHOT turns into NEUT, which go almost as straight as PHOT.

When traveling through BIZR/BIZS, PHOT will turn into ELEC. This makes electron lasers possible.

Also, when traveling through deactivated GPMP, PHOT turns into GRVT.

Photons change color when they bounce off of uranium, plant, plutonium, C-4, and other elements.

In early version of TPT, photons were limited to only eight directions, up down left and right, and diagonal. They only had one color, white, and could transfer heat between themselves while traveling, going several spaces per frame and giving them the ability to travel through thin substances. A lot has happened to them in more recent updates that makes them almost totally different, and a whole lot better. 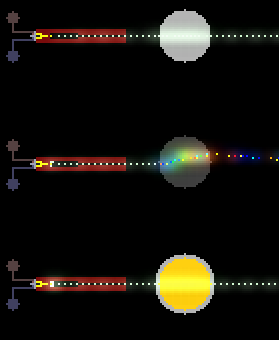 Originally photons could pass through LCRY, CLNE, and GLAS. That's still the same, but as the screenshot displays, glass now changes the direction of incoming and outgoing photons and randomly assigns them a different color and speed. Colors on different parts of the spectrum are reflected at different speeds/angles, and so.. 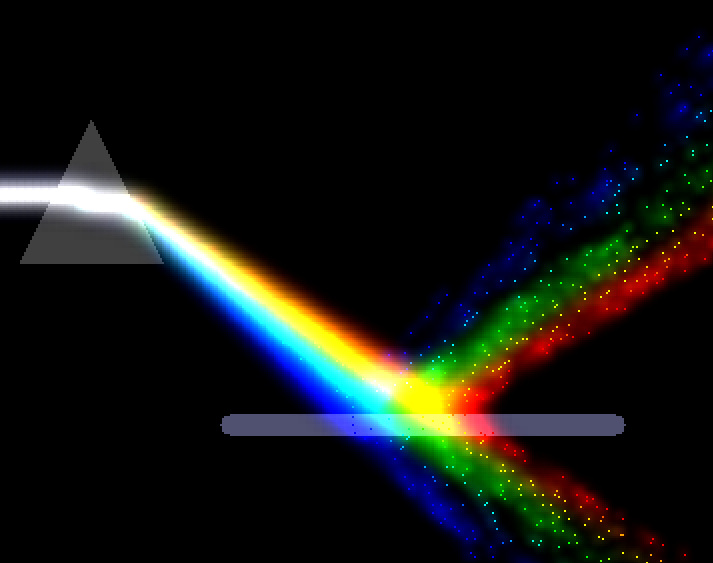 Rainbows are possible now. Notice that the bar of BMTL only reflects 50% of the photons that touch it now, while the other half pass through. 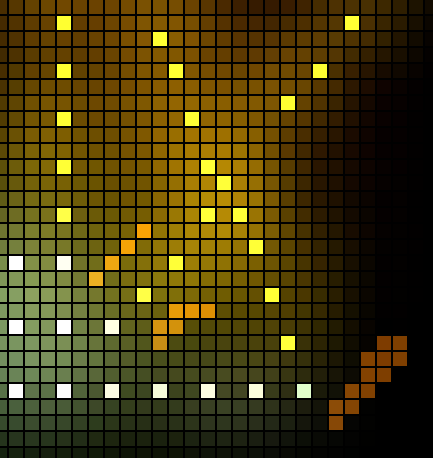 Photons now calculate the angle of surfaces they touch, and use that information to determine their new angle, meaning that a photon can change direction while touching a surface depending on pixels that are actually somewhat far away, though the exact distance I can't remember. The pixels it takes this from must at least all touch one another, with some exception (like the diagonals displayed here.) Photons don't check for empty space while calculating angle, so if the pixels wouldn't be found in a flood fill they likely won't affect the end result. Play around with it, you'll see what I mean. 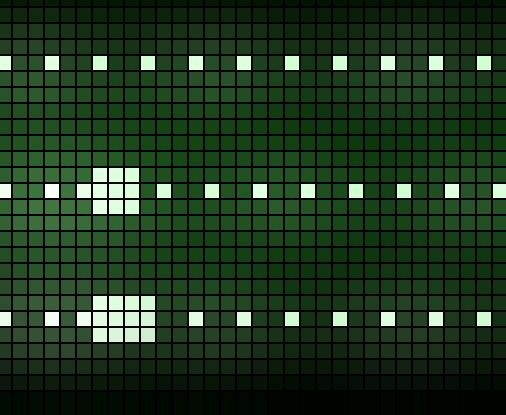 Because photons move more slowly through substances that are transparent to them, you can use elements like LCRY to change the position of traveling photons to better suit your needs. 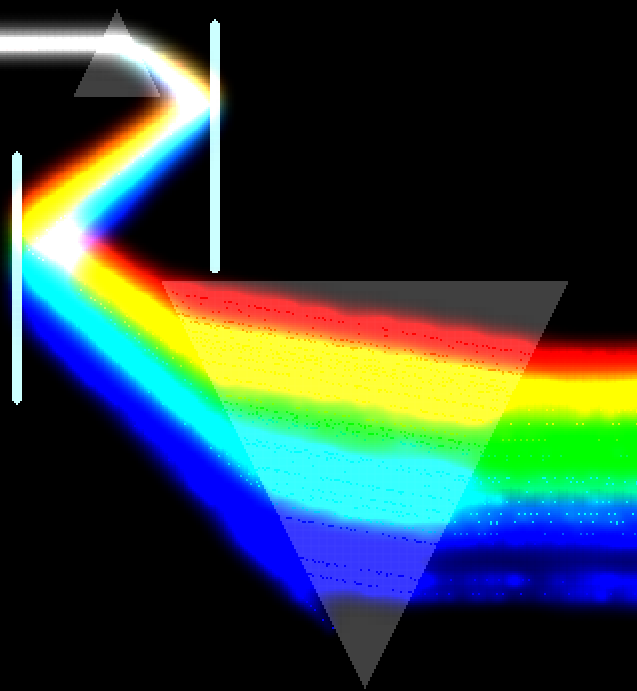 Because of the way refraction works, if you push photons through an angle of GLAS or other solid that is the exact opposite of the previous angle touched, the photons will be moved in the exact direction they started in. 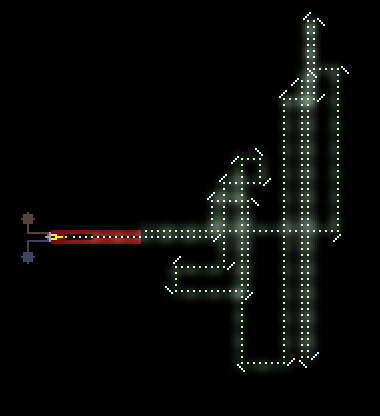 There's nothing to stop you from bending photons in any number of ways you like. 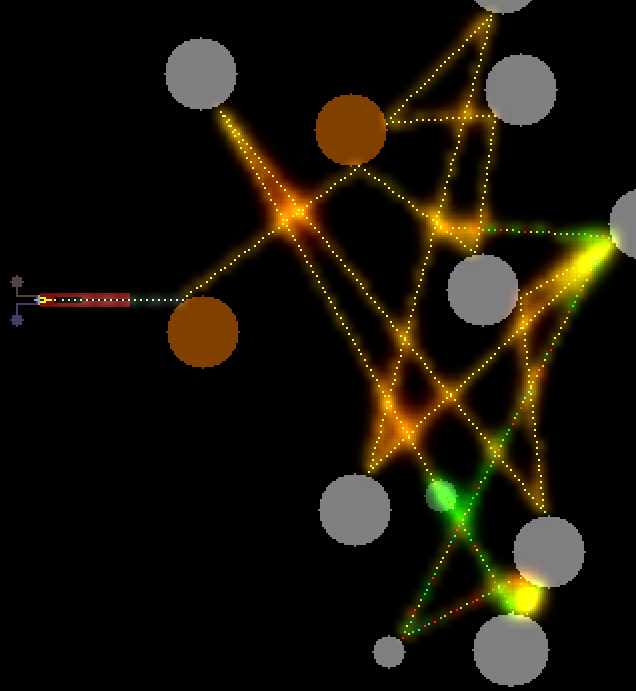 When photons touch an object that has a specific color (besides certain metals), the wavelengths of light that the object does not reflect will no longer appear in the photon that touches it. IE, photons touching PLNT turn green, touching LAVA turn red. But if an only-green photon touches LAVA, it's likely to disappear. You can learn more about wavelengths here -> (https://powdertoy.co.uk/Wiki/W/Wavelengths.html). 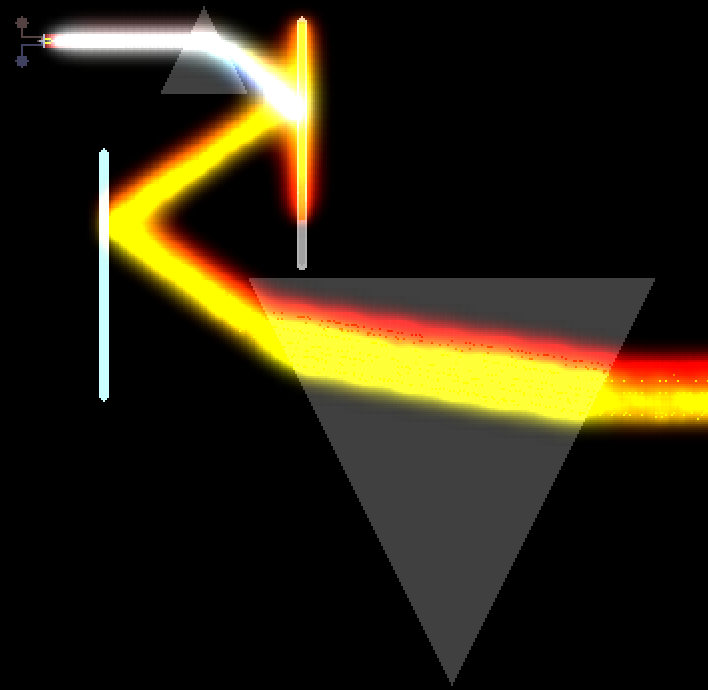 As a result, you can actually make just about any color you want if you know the right combination of element bounces will produce the color you need. Take Cracker64's tiny rainbow gun for example. 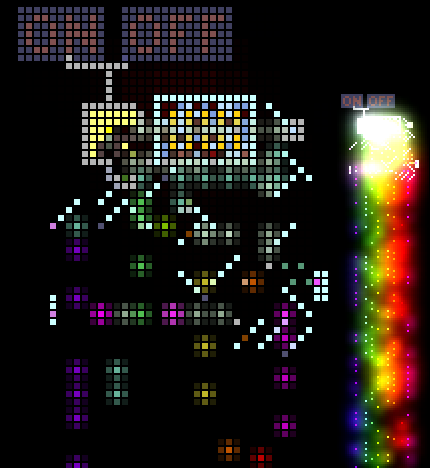 This is called total internal reflection, when light passes through something and bounces off of its inside. It's easy to do in TPT now, but the tricky part is finding the correct angle to make it happen with. Photons will generally get stuck TIR'ing inside of GLAS if random particles are dropped nearby, even though most of the photons will tend to escape. 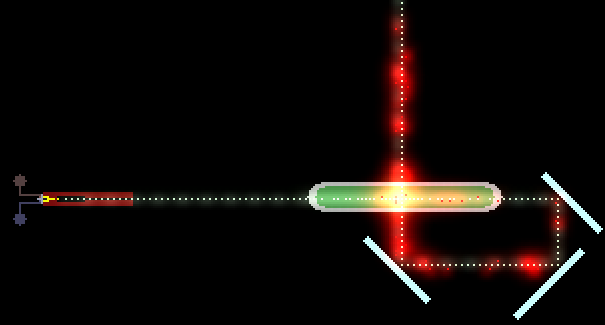 GLOW particles now have a use besides looking pretty. They augment photons when they pass through them after a preset amount of time (about one second.) The newly created photons will appear to have a preset color, which depends on the exact temperature of the GLOW. It doesn't change the color of already-existing photons, however. It only adds colors to the photons it creates. When photons travel through GLOW, GLOW particles use life to determine how much longer until they can augment the photons again.

Combining BRMT, INSL and very specific temperatures of GLOW can have interesting effects. 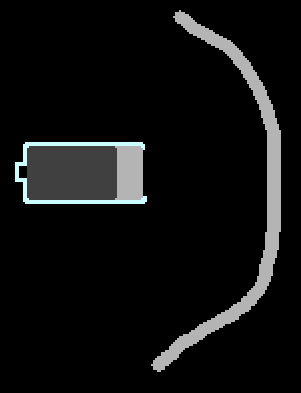 Neutrons (NEUT), while not photons, are technically related now. Neutrons traveling through GLAS have a small chance of turning into/generating photons, which isn't immediately obvious due to how blue photons and blue neutrons now look effectively identical. 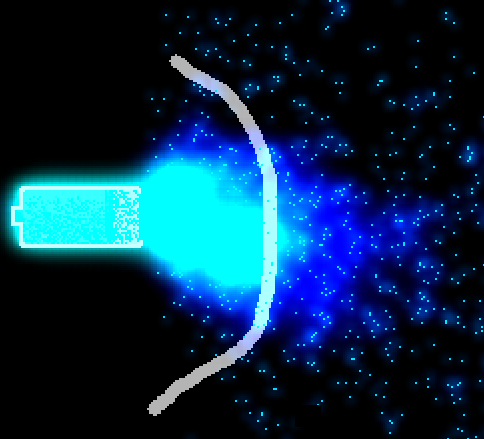 So, by pouring neutrons into one end, photons come out the other end. This effect is called Cherenkov radiation. 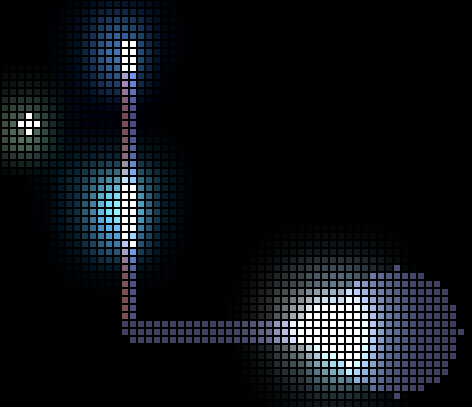 And finally, photoelectricity. When photons touch PSCN which is touching NSCN, SPRK is created. 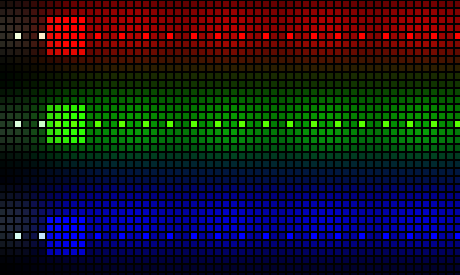 This new element, FILT, changes the colors of incoming photons depending on its temperature and other properties. The image here shows three different colors and the resulting photon colors. For more advanced usage of FILT, check Element:FILT.

List of elements that will reflect PHOT with a different colour