First, we’ll start the the absolute most basic materials involved in electronics

The most basic wire or conductor in the game, it conducts to almost any other conductive elements. 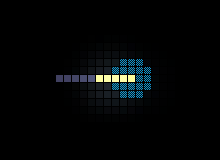 Spark is the charged state of most conductors, it cannot be placed normally in the game like other materials, it has to be placed on top of a conductor to charge it. Any conductor that is charged will appear yellow and have a faint blue glow.

When a material is charged at a single point, it will try to spread outward like a wave in all directions.

Spark may jump very small (1 pixel) horizontal or vertical gaps (but not diagonally) to spread to another conductor, this is a very useful mechanic when it comes to working on a small scale, because it allows for the creation of more complicated arrangements of conductors so they don’t “short out”, it also allows for physical separation to prevent the transmission of heat while still being able to pass an electrical signal.

An animation of metal wire conducting a charge of SPRK, below the wire is a gradient mapped view of the life value of the material.

This is a quick explanation of how conduction works at a lower level, feel free to skip this part.

When you see charged metal in the game, it is actually a different element (SPRK), when spark spreads, it replaces the conductor (which must have a “life” of 0) with itself, setting the particle “life” to 4 and the “ctype” to the original element. When the “life” counts down and reaches zero, the SPRK will replace itself with the original element and set its “life” again to 4, as mentioned earlier, SPRK will only spread to “life” 0 conductor, setting the “life” to 4 creates a cool down timer that prevents it from looping back on itself indefinitely.

METL is the most basic conductor in the game, it alone is not sufficient when creating more complicated circuits, that place is filled by the other conductors available in the game; these conductors are where the fun happens, the reason for this is that they only conduct to certain conductors or only conduct under set conditions.

These two conductors where the first semiconductors introduced to the game, their core mechanic is that SPRK can move from PSCN to NSCN but not the other way around, this allows a junction of PSCN and NSCN to behave like a diode. PSCN is commonly used to activate powered materials while NSCN is used to deactivate them.

A metal wire conducting a charge of SPRK near a block of NTCT, below the wire is a gradient mapped view of the temperature value of the material, notice how the block of NTCT has heated up

Negative / Positive Temperature Coefficient Thermistor, these two materials will only conduct when their ideal temperature is met, for NTCT, this is when it is hot (above 100C) and for PTCT this is when it is cold (below 100C). Both PTCT and NTCT will always receive charge from NSCN, but will only receive charge from PSCN when the previously mentioned temperature condition is met. Because of this, a PSCN - (P/N)TCT - NSCN junction will behave like a diode only when its temperate condition is met.

Furthermore, a nearby charge from METL will not pass through to (P/N)TCT, but it will cause it to heat rapidly to ~200oC. This allows the creation of an AND gate. This temperature based activation is only temporary as (P/N)TCT cools itself to 22C.

Insulated Wire. This conductor behaves exactly like metal, but will not conduct to METL, PTCT or NTCT. It is useful for making 'compression wires' by alternating 1 pixel of METL and INWR, conducting 2 channels in the space of 1. INWR is also transparent to ARAY.

What it says on the tin. INST conducts instantly, but must be adjacent to another pixel of INST to make a connection. SPRK has to be sent to it through PSCN and received through NSCN, a bit like a powered element. If you make a 4-way intersection, SPRK will only transfer straight across the intersection, it won't turn left or right, which lets you make crossings.

SPRK will pass from METL to both NSCN or PSCN or vice versa. SPRK will also pass from PSCN to NSCN, but will not pass from NSCN to PSCN.

The simplest logic gate you can create, it consists of two diodes (one on each input) that allows current to travel from either one of the inputs to the output without flowing back into the other input.

In the example on the left, the output shares a common common cathode (NSCN) with each input having their own anode (PSCN).

A little more complicated than OR gates, but still relatively simple. It consists of a NTCT core, a NSCN output and two inputs: one METL and one PSCN.

The METL input (A) is used to "activate" (i.e heat up) the NTCT core to allow the PSCN input (B) current to travel through to the NSCN output.

Because the operation of the NTCT core relies on its thermal properties (the ability to conduct when hot and to cool down itself) it is important to thermally isolate the core, an air gap is usually sufficient.

Because of NTCT's mode of operation, there's a slight timing bias due to prolonged (and delayed) effect the METL activation has, powering input B before A may not be as reliable as the reverse order. The delay effect is proportional to the size of the core, the smallest core (1 particle) has no delay.

Because there's only one input, it does not suffer the same timing problem as the AND gate.